Does Mike Perry have a wife or girlfriend? 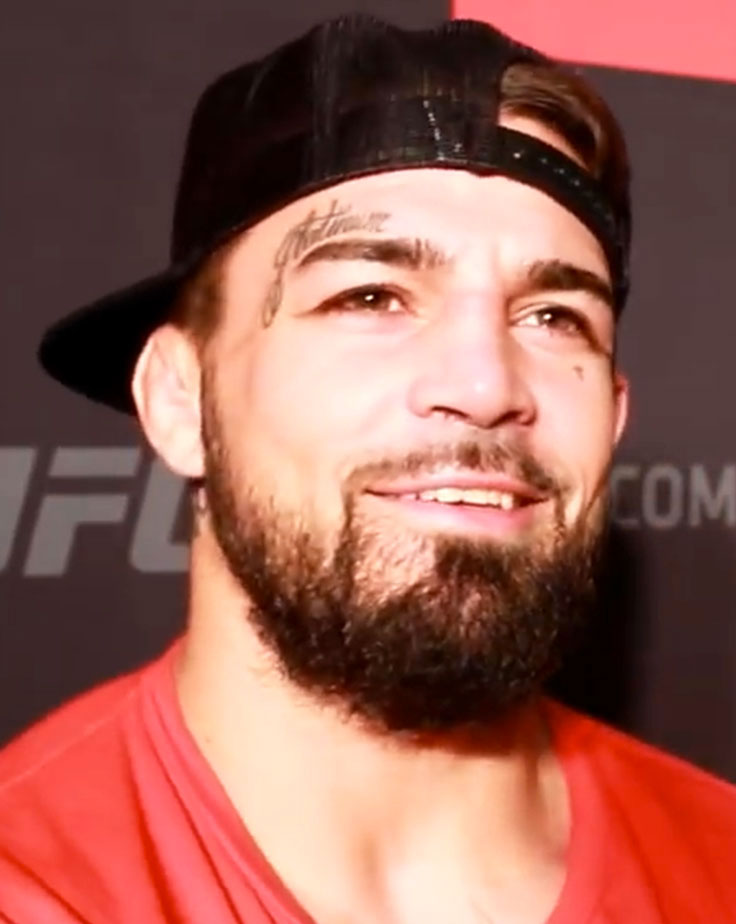 Professional Mixed Martial Arts in North America often get called a “controversial combat sport,” and many fighters excel at stirring it up—in or out of the UFC Octagon®.

Welterweight Mike “Platinum” Perry is a shiny example of talent, triumph, and dangerous temperament. Since his first KO in a 2016 UFC match, Mike Perry’s net worth has climbed over 1.25 million dollars.

Born into a tough Black neighborhood in Michigan, Perry called himself a ‘mostly white kid’ getting bullied nonstop. He grew up fighting, doing drugs, getting arrested, and violating probation. But he also began to box at age 11, and Perry started his UFC training years later in Winter Springs, Florida.

During his recent UFC matches, Mike Perry’s girlfriend has stood alone by his side. There’s a dramatic story to tell there—but Mike Perry’s ex-wife has her own harrowing story, and once upon a time, she was right there with him too.

From Mike Perry’s girlfriend Latory to his now ex-wife Danielle, we’re breaking it all down for you here.

Mike Perry and his wife (now ex-wife) got married in 2019. Even though the romance was short-lived (they didn’t clear their first anniversary), Danielle and Mike’s wedding website is still live, and their meet-cute was straight out of a rom-com script.

In 2017, before UFC on Fox 26, Nickerson told a reporter that she met Perry because she wanted kickboxing lessons. She was frustrated at the time (calling around to local gyms with no one answering their phone), yet cupid’s arrow struck as she got Perry on the line.

Perry was training at his gym and only answered the phone because the receptionist was busy at the time. Nickerson told Perry that she wanted to try a kickboxing lesson that day. Although Perry was got a little off guard, he took her up on it. They fell in love and eventually got engaged.

But did you know that Perry and Nickerson’s wedding almost didn’t happen?

Mike Perry’s Ex-Wife Broke up With Him Before Engagement

In March 2018, MMA sources reported that Nickerson broke up with then-boyfriend Perry because of his “wandering eye.”

The news devastated diehard fans because Nickerson was always Perry’s “corner woman.” It was common knowledge that she helped Perry with intense training sessions and prepared his meals (for all intents and purposes, she was as beloved as him). In an attempt to let UFC fans down easily, Nickerson posted a heartbreaking post on social media to explain the breakup.

Seemingly against all odds, UFC fans were then shocked and surprised when the Mike Perry wife news broke in February 2019. Perry and Nickerson were back together and announced their engagement.

So, the princess got her fairytale ending…right?

Happily Ever After Denied

Mike Perry’s wife experienced a living nightmare in February 2020. Nickerson allegedly suffered a drawn-out incident of terrifying abuse by Perry in their Florida home after a night out.

A shocking 911 recording backs up her story, and she also shared disturbing photographic evidence with limited sources. That said, she didn’t intend to make the photos fully public because she didn’t want Perry’s UFC career to suffer.

Nickerson said the violent situation felt “like a movie” and not her real life. She finally told herself to get out of the house and away from him, convinced she would die if she didn’t.

The unsettling claims from Mike Perry’s wife made a quickie divorce inevitable. With Mike Perry’s now ex-wife out of the picture, it seemed to take about a hot second until we spotted a new Mike Perry girlfriend in 2020.

Some may consider it cold-hearted for moving on that fast, but Perry at least did have a ton in common with his new girlfriend, Latory Gonzalez. Latory, a female wrestler from Texas, was a trained martial artist.

How Did Mike Perry Meet His Girlfriend, Latory

Mike Perry’s GF was supposedly introduced to him by fellow UFC fighter Jon Jones. Perry and Gonzalez met in a bar and left the joint holding hands. If that wasn’t an obvious enough sign that Mike Perry’s UFC girlfriend had arrived, he went a step further to cement her “corner lady” status.

Perry has a notoriously bad rep for blaming his losses on his trainers. So when things finally reached a boiling point for the fighter, he banished all of his trainers from his matches and installed Latory as his sole “corner lady.”

It was seen as a whackjob move and widely panned, but there were good results: he followed up with impressive wins via unanimous decisions.

Baby in the Corner Makes Three

Nobody puts Baby in a corner…unless we’re talking about Mike Perry’s girlfriend Latory!

In January 2021, Latory had a baby boy in Miami, Florida. Perry tweeted the happy news about having a son, but he also revealed a scary situation in the delivery room…

Perry tweeted that his newborn wasn’t breathing after his birth. The medical staff was quick to respond, and momma and baby were declared healthy.

As Mike Perry’s girlfriend awaited their son’s birth, Perry got real on his socials about fatherhood and finally growing up. It seems that Perry wanted to be an example for his son, and he wanted to leave his bad rep behind him.

Unfortunately, the drama wasn’t yet finished, as gossip outlets posted a graphic video of Perry in January 2021, just days before his son’s birth. Perry had seriously injured his foot attempting to smash through a glass door. His strange behavior in the video and the bloody scene made viewers cringe, and many doubted his intentions about manning up.

Yet Another Mike Perry Girlfriend Breakup

In May 2021, shocking news broke that Mike Perry’s girlfriend Latory had left him. What was even more surprising was the person revealing the story: Perry put it on his Instagram, muttering that “my girlfriend left me, so I’m just out here wandering…”

Is Mike Perry destined to keep wandering alone? Only the future will tell.

Source: MMAnytt
Via: CC BY 3.0, via Wikimedia Commons
ShareTweetPin