Does Von Miller have a wife or girlfriend? 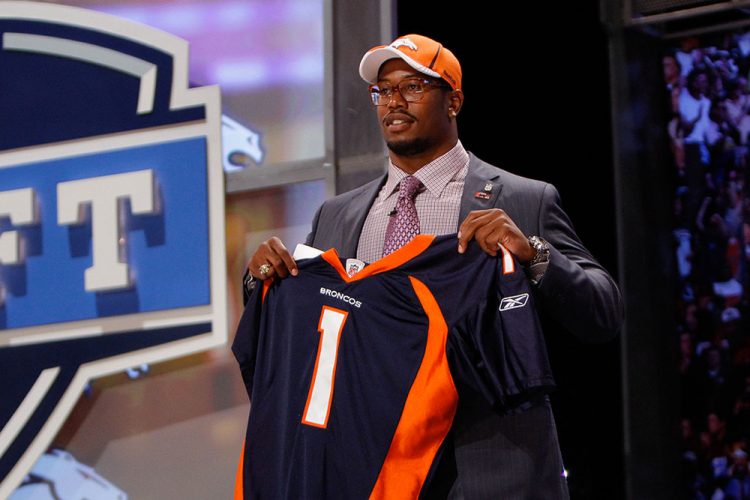 Von Miller is a mainstay for the Denver Broncos in the NFL. He holds the outside linebacker position and is, to this day, considered one of the absolute best defenders in the league. He is an eight-time Pro Bowl selection, and as of 2021, is the active player with the most career sacks.

In 2015, Miller was named the Super Bowl MVP. He is now the longest-serving Denver Bronco, too – all extremely impressive! However, you may also know him from season 22 of Dancing with the Stars, which aired in 2016.

Relationship-wise, Von’s been in the press quite a few times, especially regarding his ex Megan Denise.

So, are you curious who is Von Miller’s ex, Megan Denise? Or who is Miller’s girlfriend now? Or if he’s married? Keep reading for the full lowdown.

Von Miller Wife: Was He Ever Married?

However, there’s a good reason you may have thought otherwise. Miller made his engagement to then-girlfriend Megan Denise clear in 2018 when she wore an engagement ring publicly on the red carpet.

However, it certainly wasn’t happily-ever-after for the young couple, and a couple of years later, Von Miller is still under investigation regarding allegations made against him by Megan.

So, what happened? How did things go from true love to police investigations so quickly?

What happened between Von Miller and former fiancé Megan Denise?

Having met in 2018, Von Miller and Megan Denise seemed to be a perfectly adorable couple. In fact, things seemed to be going so smoothly that just two months into their relationship, Denise had the nickname “Vonnie” tattooed in bright red across her chest, referencing her then-boyfriend.

Denise also appeared to comfortably support Miller, joining her beau at work events and on the red carpet, where they even debuted the engagement.

However, in 2020, fans started to suspect that the two had broken up when they noticed that Miller had unfollowed Denise on social media – and vice versa.

Since then, the drama has escalated. In 2020, the two came to blows publicly after Denise shared screenshots of messages between the two regarding her pregnancy. Megan became pregnant with Von Miller’s child in late 2020, news to which the NFL player did not react too positively – so it would seem.

According to Denise’s social media, Miller said this was a huge mistake, and he encouraged her via text to get an abortion. He publicly denied these allegations, calling them “fake news.” Following the allegations, an investigation opened up.

Since then, their firstborn child Valor B’Vsean Miller was born in August 2021. Miller was with Denise during the delivery and has praised her strength during the birth.

So, now that you know the background buzz on what happened between Von Miller and his ex-girlfriend Megan Denise don’t you think it’s time to learn a little more about her?

Although you most likely know her as being Von Miller’s ex-girlfriend (and now the mother of his child), Megan Denise definitely had an exciting and full life before Von Miller!

She is also a successful model and actress in her own right, starring in shows as diverse as The Hat: Viral Spots and Typecasted and films such as Fates of Ambition and Bikini Mayhem.

She is popular on social media and was discovered as a model thanks to her fabulous figure and keen sense of style. She also used to be known for working as a dancer at Floyd Mayweather’s famous strip club, Girl Collection.

Since her dancing days, Denise started her own clothing line in 2018 and has accumulated over one million Instagram followers. She’s even thought to be worth more than $300,000. Not a bad haul at all!

Does Von Miller have kids?

Yes, as of August 2021, Von Miller has one child, a son named Valor B’Vsean Miller, with Megan Denise.

Both parents have posted photos to their social media accounts honoring their new arrival.

Who is Von Miller’s girlfriend today?

Following their tense split, in January of 2021, Von Miller posted photos online of himself physically close with another young woman while on holiday in Cabo. The woman’s face was not revealed in any of the pictures, presumably, so Miller could keep her safe from any online drama.

The photos were then removed from social media, but not before everyone could take a good look. As you can imagine, once something’s on the web, it’s almost inevitably there for good.

It is not currently known whether or not Von Miller is still dating his love interest from Cabo, or even if he is in a romantic relationship with anyone. We’ll certainly keep an eye on his Insta, of course, as things change quickly in celebrity land!