Does Cam Newton have a wife, or just a girlfriend? 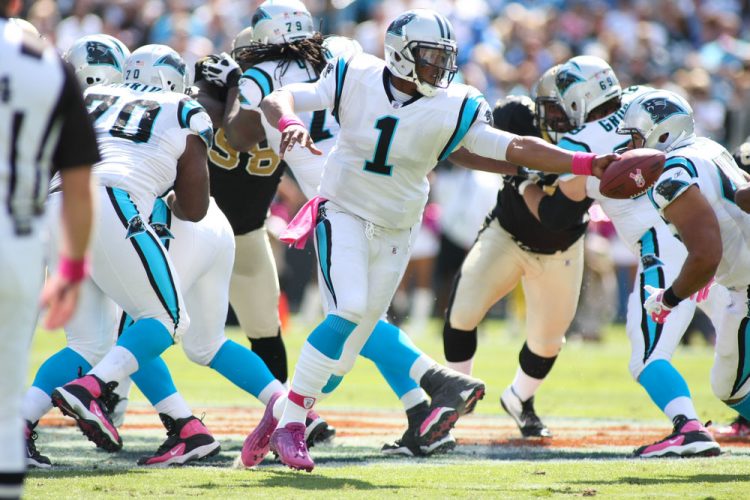 Life has gotten pretty crowded for one of football’s greatest—and most controversial—players. While his future as starting QB for the New England Patriots is debatable, we’re talking about Cam Newton’s checkered past and his jam-packed personal dramas.

So, is there a Cam Newton wife? Or has it always been Cam Newton and girlfriend? We’ll begin with what Newton himself has admitted: he’s fathered five children to date, and he’s apparently helping to raise two other kids.

After a Heisman Trophy-winning college career, so-called “Super Cam” Newton went #1 to the Panthers in the 2011 NFL Draft. He still tops the NFL career leaderboard in rushing touchdowns and also made it to Super Bowl 50. But Newton’s last several years on the gridiron have seen him injury-plagued with erratic behavior.

While his first year in New England was lackluster at best, Newton’s personal life has always been nothing short of explosive.

Keep reading as we dive into everything we know on the saga that is “Cam Newton spouse” vs. “Cam Newton girlfriend.”

The History of Cam Newton Girlfriends

Newton is no slouch in the romance department, and his dating life was like a revolving door when his pro career launched in 2011.

Within a couple of years, Newton would then meet a special someone… in a very exotic profession. They became a serious item pretty quickly, and gossips figured Cam Newton would get married.

Was She Really Cam Newton’s Wife To Be?

If there isn’t such a thing already as an xxx-rated romance novel with a distinctly unhappy ending, it might go something like this.

In 2013, sources reveal that Newton fell hard for a woman named Hazel. While that wasn’t Cam Newton’s girlfriend’s real name, it was her stage handle as an exotic dancer at the Stadium Club, billed as “Washington, DC’s Premiere Gentleman’s Club.”

Hazel was born Shakia (Kia) Proctor on October 16, 1988, and people eventually assumed she was Cam Newton’s wife. Spoiler alert: these days, she’s more like Newton’s nemesis (more on that in a bit…)

But Newton did make sweet references to Proctor during the honeymoon phase of their relationship.

Tongues wagged about Newton taking a “stripper” to the fancy-schmancy 2013 Kentucky Derby. But, aside from random instances when they did step out, Newton kept his personal life under the radar—until December 2015, when he referred to Proctor on social media as his “longtime girlfriend.”

On December 24, 2015, Proctor gave birth to Newton’s first son. While he’d stayed mum about dating Proctor, Newton gleefully tweeted out their parenthood news. In 2016, just before Superbowl 50, Newton even proudly claimed that his one-month-old son was walking.

A popular search term in the last decade continues to be, “is Cam Newton married?” Even without proof, many assumed the answer was yes, as Newton and Proctor were creating a family. Yet, a better question now is, would they ever have found a spare second to get hitched?!

Between December 2015 and December 2019, Proctor and Newton had four children: Chosen, Camidas, and Cashmere (3 sons) and a daughter named Sovereign Dior. Proctor also has a daughter, Shakira, from a previous relationship.

Newton is open and frank about his love of fatherhood, and he seems like natural daddy material. He went as far as to call Proctor “the best thing to happen to him.”

That said, Newton definitely had a bit of a double life going on, and he’d be on double-daddy duty very soon.

A few years before she hooked up with Newton, the online edition of Iron Man Magazine crowned Shaw Queen Of The Bikini Season. In an interview, Shaw gave some clues into her seductive spirit.

Born in Azerbaijan, Shaw said her family was “open-minded” about showing their bodies. While growing up in Germany, surrounded by a lake, there were always bikini-clad people who were “very free, even naked.”

While Proctor was busy carrying her fifth child, Newton and his lovely sidepiece were getting busy too…

Not Cam Newton’s Wife, But His New Baby Mama

Although Newton tried to keep those complications under wraps, the rumors eventually swirled out of his control, and Shaw isn’t unafraid of showing fans what she’s got.

Shaw recently posted a random pic to her socials of her and Newton before a HIIT workout. Maybe she’s his fitness inspiration, as she notes, “He’s killing it at training camp!.” Sources now say that Shaw, Caesar, and her older son (from a previous relationship) live in an apartment above Newton’s restaurant in Atlanta.

So how has Proctor taken it?

As soon as Newton and Proctor’s breakup was official, the court cases broke out. Of course, legal battles over child custody and support issues happen all the time, but Proctor vs. Newton is playing out in real-time on the field of life, and it’s gotten messy.

Newton is battling Proctor for joint custody, although he’s also suing her for DNA testing to confirm he fathered her four youngest kids. Once that mud gets cleared, he thinks the court should be the one determining how much support he has to pay.

Proctor is having none of that. Not only is she countersuing for primary custody of their kids, but she also wants “child support above the normal guideline.”

Oh, and by the way, Proctor hit Newton with one last “ouch” nail in the coffin too. She wants him to shell out $15,000 for forensic accounting to deep-dive into his finances.

At the end of the day, we hope these two work it out for themselves and their kids.